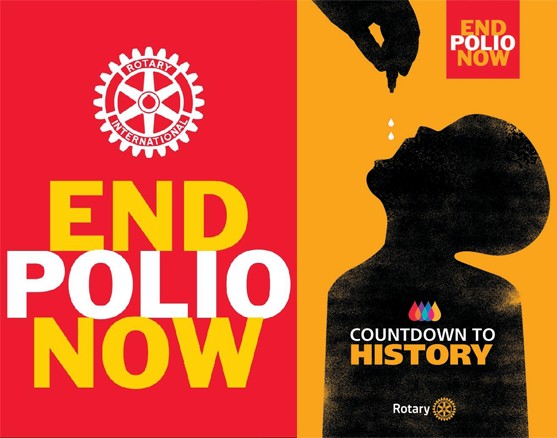 Poliomyelitis, or polio, is a paralyzing and potentially fatal disease that still threatens children in some parts of the world. Poliovirus invades the nervous system and can cause total paralysis in hours. It can strike people of any age but mainly affects children under five. Polio can be prevented by vaccines, but it is not curable. Unlike most diseases, polio can be eradicated.

For more than 30 years, Rotary and our partners have driven the effort to eradicate polio worldwide. Our PolioPlus program was the first initiative to tackle global polio eradication by vaccinating children on a massive scale. As a core partner in the Global Polio Eradication Initiative, Rotary focuses on advocacy, fundraising, volunteer recruitment, and awareness-building.

Rotary members have contributed more than $2.1 billion and countless volunteer hours to protect more than 2.5 billion children in 122 countries from this paralyzing disease. Rotary’s advocacy efforts have played a role in decisions by governments to contribute more than $10 billion to the effort.

When Rotary and its partners formed the GPEI in 1988, there were 350,000 cases of polio in 125 countries every year. Today, we have reduced polio cases by 99.9 percent, and just two countries continue to report cases of wild poliovirus: Afghanistan and Pakistan. Because of the efforts of Rotary and its partners, nearly 19 million people who would otherwise have been paralyzed are walking, and more than 1.5 million people are alive who would otherwise have died. The infrastructure we helped build to end polio is also being used to treat and prevent other diseases (including COVID-19) and create lasting impact in other areas of public health.

Rotary and our partners have made tremendous progress against polio, but eliminating all cases is going to take even more progress and perseverance. Afghanistan and Pakistan face unique challenges, including political insecurity, highly mobile populations, difficult terrain, and, in some instances, vaccine refusal and misinformation. With sufficient resources, the commitment of national governments, and innovations that improve access to remote areas, we are optimistic that we can eliminate polio.

Rotary has committed to raising $50 million per year for polio eradication. The Bill & Melinda Gates Foundation has pledged to match that 2-to-1, for a total commitment of $150 million each year. These funds provide much-needed operational support, medical workers, laboratory equipment, and educational materials. Governments, corporations, and private donors all play a crucial role in funding.

More than 1 million Rotary members have donated their time and money to eradicate polio, and every year, hundreds of members work with health workers to vaccinate children in countries affected by polio. Rotary members work with UNICEF and other partners to prepare and distribute informational materials for people in areas that are isolated by conflict, geography, or poverty. They also mobilize to recruit fellow volunteers, assist in transporting the vaccine, and provide other logistical support.